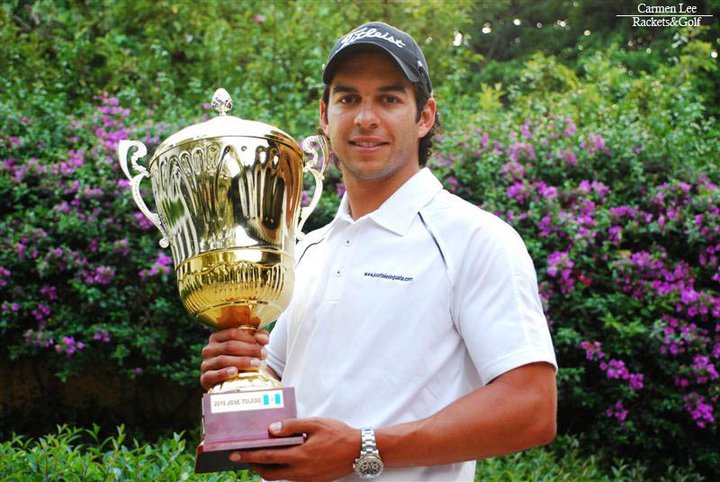 2011:
Toledo’s active 2011 season was his second as a professional. Including 6 top 10 finishes for a career 70.4 scoring average in 28 starts.
The former UNO golfer won two tournaments including the Abierto de Hacienda Nueva in March with scores of 71 71 69 72 for a 281 (-7) and a first-place finish in a U.S. Open local qualifier in May.
Other top results include a sixth place showing in the PGA Q-School second stage event in early November.

The Guatemalan golfer Jose Toledo flew from China to California on Monday ahead of competing in the ‘Final Stage’ of PGA Tour qualifying that begins Wednesday at the PGA West Nicklaus Resort and PGA West Stadium courses. Toledo’s late arrival to California comes after the Guatemalan represented his country in the 2011 Omega Mission Hills World Cup over the weekend. Teamed with countryman Pablo Acuna, the duo posted two sub-par rounds against the world’s best professional golfers.

2010:
Toledo’s first full season as a profesional golfer was a success. Playing the Adams Golf Pro tour series with 11 cuts on 16 starts for a career 2nd place in the order of merit.
In his 9 top 10 finishes he won twice this year including the Abierto de Hacienda Nueva with scores of 68-68-71-69 for a 276 (-12) and his first profesional win in the US, The East Texas Open with scores of 73-68-69-65 for a 275 (-9).
He advanced to 2nd stage in the PGA Tour qualifying tournament and got named Adams Golf Tour rookie of the year.

2008-09:
Had a 73.58 scoring average and broke par seven times… Had season-best 68 at Louisiana Classics on March 9 and finished 11th individually… Also had three top-10 finishes, including a season-best sixth at the Palmer’s Toyota Fall Intercollegiate in Mobile, Ala. Won the Central American Amateur Championship in February thanks to a final-round 67.
Represented native Guatemala at prestigious World Amateur Championship finished in the top 50. He won the Guatemalan Open for third time at Hacienda Nueva Country Club with a new country record with rounds of 69-71-69-72.

2007-08:
Was named Louisiana Sports Writers Association Player of the Year for the second straight season and was an All-Sun Belt conference pick. Became first player under head coach Chris McCarter to be selected to compete in the NCAA Regionals. Competed at the NCCA Central Regional in Chattanooga, Tenn. Led Sun Belt Conference with a 70.97 scoring average and had 19 under-par rounds, his scoring average was the 11th best i n the country. Shot a career-low 66 at Sam Hall Invitational in Hattiesburg, Miss., on Nov 5. Had eight top-10 individual and six top-five finishes. Won individual medalist honors at the season-opening Troy Invitational Sept. 10-11.
He finished the year with a win at he Guatemalan Open played in Alta Vista Country Club.